I want you to picture yourself at a concert – the lights are bright, the crowd are on their feet and on the stage is a man that plays and strokes a guitar as a man would a woman’s body. And there as the lighting swirls around the venue there is one seat right at the front the remains empty while the place is filled to capacity. Do you stop and think what the story might be around that seat why it is empty when the place is sold out and if your not near the front you would miss the musician on the stage eye’s darting to that one stop time and time again. Now you are ready to read and be blown away by the story of Ryder and Kailey. But never forget about the seat that remains empty! 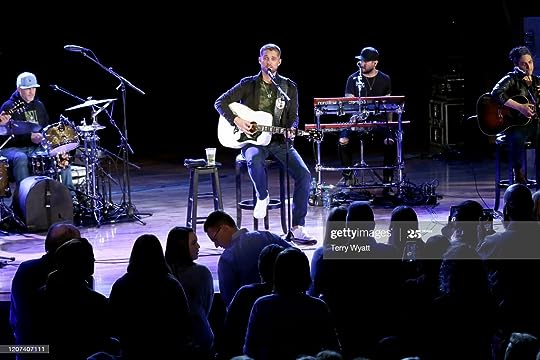 ‘For the next hour, I was just a guy hanging out with a beautiful woman

Calling Ryder a second chance romance doesn’t truly incubuses this couples story. A story where for one night a man living in the spot light where woman throw themselves at him and doesn’t believe in happily ever afters could be just a man at a concert who by chance meets a girl when the rain came down and they end up in the same tent with her having no idea who this handsome man was. A man that wanted to spend time with Kailey a girl that had been so focused on finishing her masters degree she wanted to push back and enjoy herself. But like a dream and the promises that Ryder made that night when Kailey wakes up the next morning she is alone.

But a few months that chair (the one I told you not to forget about) now has Kailey sitting in it and a secret to reveal – Ryder is about to become a dad. Kailey wants nothing from the man that broke his promises but now Kailey is back Ryder is not about to let her slip through his fingers a second time not known not ever.

But their story doesn’t end there Ryder and Kailey’s story is difficult it is sad funny and very emotional as we final get to see the man behind the mask and meet the ghost’s that Ryder buries deep inside him the ghost and pains that stop Ryder saying the three words Kailey longs to hear – I love you!

And that seat is going to be empty again before the end of the story only question is will it ever be filled again!

‘Emotions are time sucks. They need time to grow and flourish. They are slow moving, pretty easy to outrun. I should know, I’ve been doing it since I was a teenager – Ryder

Crushing Hearts embraces everything that makes a great romance. I feel in love with Pipers strength and determination picking herself up dusting herself off and landing in the brilliant Oakport Beach (I known I am going to enjoy the people and the stories to come in this little Beach town.)

When Piper takes a job in Oakport as a nurse after being let go by her previous employer and a messy breakup (finding out her boyfriend was married) she wasn’t expecting that when she agreed care for someone quite as unique as Aunt Millie in fact Piper nearly ran for the hills especially when her boss is none other than the handsome Chase the guy that helped her out when her car broke down on her way into town. Piper quickly finds out that in this some town, Crush owns most of the businesses.

Crush stayed in town when his family left – Crush and his brother have a love hate relationship more hate than love and Epic Crush’s brother is now jealous of how well Crush is doing in the town he decided to stay in. Crush finds it difficult as still after all these years nobody in his family notice exactly what Crush has achieved.

From the moment he meets Piper the workaholic Crush doesn’t want to be working quite so much. But even when misunderstands and betrayal threaten the budding relationship between the two one thing is a sure thing – No one ever leaves Oakport beach forever!

I loved the towns folk I love that they hold showers for everything – who would have thought of a ‘TV Shower’ because you go a new Hugh TV and that people even bring presents to the party! Classic!


There is nothing better than a Montgomery Ink book and ‘Seduced in Ink’ is another great read as we delve into a family that seems to get bigger and bigger resulting in so many more great stories to come.

For a fake relationship there is nothing fake about what happens between closed doors between Aaron and Madison – well you wouldn’t expect anything less from Carrie Ann Ryan,

Poor Madison she loves her parents with all her heart but all they keep doing is running her down, from the shape she is to the business she own’s. But it is to much for Madison when her Mother announces she has found a man for her to marry. Fortunately for Madison in steps Aaron Montgomery and declares he is her fiancé! Aaron the handsome glass blower who loves to read Romance Novels (loved this little snippet) took this right out of one of his novels

Unfortunately it doesn’t turn out like any book he had read because you would have thought that would have been the end of the meddling of Madison’s parents but no it just gets worse for poor Madison and to top it off she can’t stop thinking about Aaron as being more than a pretend Fiancé. Aaron knew it was a risk to help Madison as he has been having anything but pretend feelings for Madison for ages.

What started out by Madison’s parents to marry her of to a man of her their choice is about to take a dark turn and Madison’s life is put into danger.

View all my reviews

View all my reviews

A lover of books who would like others to get the bug. “If one cannot enjoy reading a book over and over again, there is no use in reading it at all.” ― Oscar Wilde View all posts by CAROLINE